The origins of Drink Limits

Written by Lucy Watson. Lucy is a recently appointed Community Health Promotion Officer in ACON’s Alcohol and Other Drugs and Mental Health programs. She has lived in Sydney for 11 years (long enough to have seen at least four refurbishments of the Sly Fox) and identifies as queer.

We care about this, so we’ve been keen to learn more about the ins and outs of drinking for these communities, and to respond in the best way possible. Everyone’s reasons for drinking are different and not everyone who drinks experiences harms. Some of us, however, do experience harms and others of us might wish to learn some strategies that will enable us more agency and control around our drinking decisions.

ACON’s new Drink Limits Program, a free eight-week group work program for lesbian, bisexual and queer women (trans and cis) and non-binary people who want to change their drinking habits (originally developed by Thorne Harbour Health.  I want to explain how we got here.

Data collected by ACON (in our SWASH survey) and other research bodies routinely show that LBQ women (both cis and trans) and non-binary people drink at elevated rates compared to their heterosexual counterparts. According to the 2018 SWASH survey, 88% of participants reported drinking alcohol in the last year, compared with 63.5% of women in the general population. This is something that we have been committed to understanding for some years now, as part of ACON’s commitment to women and non-binary people within sexuality and gender-diverse communities.

Coming across this data wasn’t exactly surprising, given my own experiences with alcohol in the community. But it was a bit of a wakeup call. I knew that queer women had a tendency to drink, but I had assumed that everyone had a tendency for that. I didn’t realise the disparity.

Last year, ACON ran some consultations with local Sydney LBQ women and non-binary people. These consultations were ultimately a conversation with community about why many of us drink, whether this is a problem, and what can be done to encourage a better relationship between our communities and alcohol. SWASH data from 2014 reveals that 60% of participants had made an attempt to reduce how much they drink in the last year, and 26% said they would like to reduce or cease drinking alcohol, so we know this is something the community has been thinking about for a while.

At consultations last year, Sydney LBQ women and non-binary people told us that they often drink to facilitate connection and enable participation in the community. Drinking enables confidence, conversations, and participation in some queer spaces, especially bars. But on the flip side, drinking can sometimes negatively impact mental health, and makes it difficult to achieve goals. 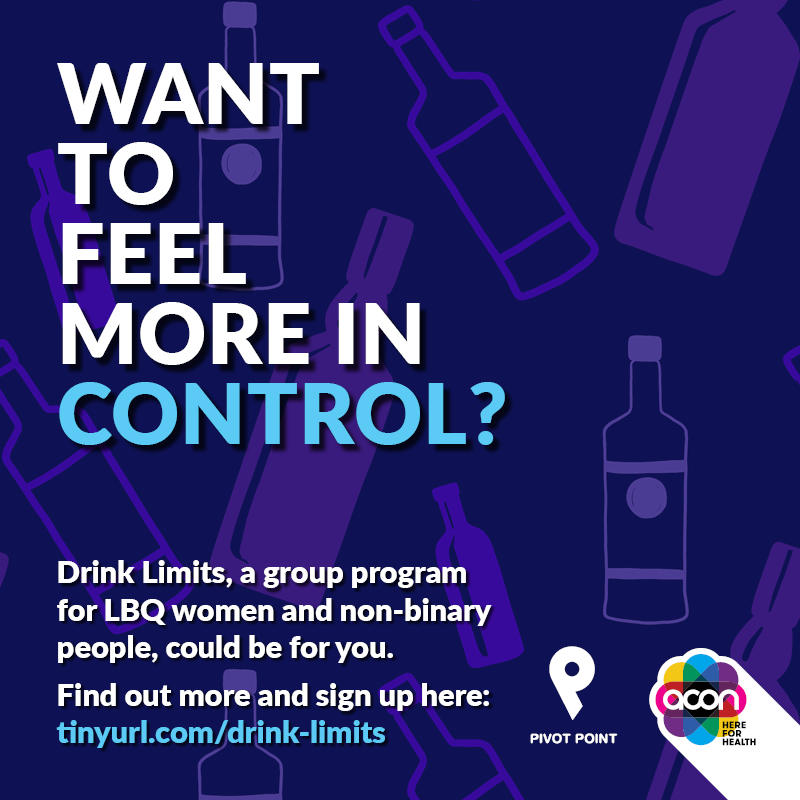 You talked, we listened. Watch this space for further campaigns and messaging work that reflects our community experiences around alcohol, and we’re piloting Drink Limits, an eight-week group program designed to help LBQ women and non-binary people change their drinking habits. Developed by Thorne Harbour Health, Drink Limits is designed to offer you strategies to reduce alcohol consumption, and help you feel better.

Our conversations with community around alcohol and our wellbeing are ongoing. We’re listening.

Due to concerns about the COVID19 virus, and protocols ACON Health is putting in place to protect the health and safety of all our clients and communities, we have taken the difficult decision to postpone the Drink Limits group program to later in the year, when we can invite you to participate with full confidence that no one will be having to risk their wellbeing in order to attend. More information about Drink Limits will be available here later in 2020.

Also in this section…